OMEGA is one of our most “magnetic” watch brands. We see OMEGAS on a nearly daily base in and out of our New York City watch repair. In this sense of the word, “magnetism,” we mean OMEGA is the kind of brand that can garner a look, a look can become a conversation, and a conversation can become a relationship. Many men in New York work hard, play hard, and engage with style, hard. Having a stylish watch on one’s wrist conveys one’s sense of style. History. Style. Technology. It can literally be “magnetic” to wear a watch on your wrist such as any of the OMEGA watches. 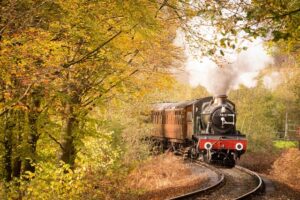 To this end, OMEGA has announced something retro that is something actually quite remarkable: a reboot of their “1957 Railmaster.” As is common in the history of time, this watch was created for the needs of a particular industry (railroads) and then picked up the by the aficionados of the Brand as a point of style. Well, what exactly is the 1957 Railmaster? According to OMEGA, “The 1957 Railmaster was designed for those working close to electrical fields; and though the new model retains the original’s unpretentious style, its Master Chronometer 8806 movement takes antimagnetic to a whole new level, resisting fields of 15,000 gauss.” In other words, this watch has two kinds of magnetism: aesthetic magnetism, meaning it attracts lover of style, and “real” antimagnetic resistance, that is a watch that is designed to resist magnetism and its deleterious impact on time accuracy.  The brand goes further, explaining “A 60th Anniversary tribute to one of three classic timepieces released in 1957, this Railmaster, limited to 3,557 pieces, is based on the original antimagnetic watch designed for those working close to electrical fields. It retains the 1957 model’s unpretentious style, but is powered by the Master Chronometer 8806 which can resist magnetic fields of up to 15,000 gauss.”

Magnetism: the Enemy of Time

Magnetism, as most people know, is the attraction and repulsion effect largely around iron-based elements. According to Wikipedia, “Magnetism is a class of physical attributes that are mediated by magnetic fields. Electric currents and the magnetic moments of elementary particles give rise to a magnetic field, which acts on other currents and magnetic moments. Magnetism is one aspect of the combined phenomenon of electromagnetism. The most familiar effects occur in ferromagnetic materials, which are strongly attracted by magnetic fields and can be magnetized to become permanent magnets, producing magnetic fields themselves.” Magnetism, as you also probably know, is connected to electricity and thus can “travel,” impacting the mechanics of a timepiece.  “Gauss” is a measurement of magnetic force. Again, according to Wikipedia, “The gauss, symbol G (sometimes Gs), is a unit of measurement of magnetic induction, also known as magnetic flux density. The unit is part of the Gaussian system of units, which inherited it from the older CGS-EMU system. It was named after the German mathematician and physicist Carl Friedrich Gauss in 1936.”

Magnetism and the Railroad

Here’s a fun series of facts. First, the railroads were instrumental in the need for accurate time. Have you ever heard the phrase, “At least he is keeping the trains running on time?” That’s because timely, accurate railway transportation was one of the first achievements of the modern industrial age. And, secondarily, with the advent of diesel electric engines, massive magnetic forces created the need for timepieces that could resist magnetism. This, then, is the backstory to this incredible watch from OMEGA. An “anti-magnetic” watch was needed by railway workers. Originally built for the railroads, the watch garnered a reputation as good-looking and “magnetic,” when it came to attracting the opposite sex. Fortunately, the new and old have converged with the re-issue of this unbelievable timepiece.

The original OMEGA Railmaster was launched in 1957. If you are lucky enough to own an OMEGA Railmaster from its original vintage, by all means bring it into the shop for an inspection, tune-up, and (as needed) repair. We’re known as the top-rated independent OMEGA watch repair in New York City. We see a lot of OMEGA watches – new, old, inherited, purchased on the pre-owned market, etc., and Ron is a true expert when it comes to OMEGA watch repair.