2022 is here! We’re excited and hopeful about the new year. Of course, we keep a keen eye on the watch industry, and first out of the box is OMEGA’s exciting announcement of their vintage-inspired Caliber 321. For the model’s 65th anniversary in 2022, Omega has unveiled a revival of that groundbreaking timepiece, with a case and bracelet in the brand’s proprietary Canopus Gold, faithful in many respects to its vintage ancestor including in its choice of movement. It’s an homage to 1957 and the first watches of the space program. Behind the watch’s sapphire exhibition caseback is the updated version of a legendary movement, the Omega Caliber 321, the original version of which was installed in the very first Speedmaster as well as the later model that made history as the first watch worn on the moon and its descendants that were worn on all the subsequent NASA moon landing missions. 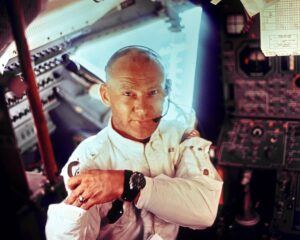 Omega revived Caliber 321 after a 50-year hiatus in 2019 and has subsequently installed it in a handful of special timepieces since. Elements include: a monobloc column wheel to drive the chronograph functions, gold-plated brass wheels, a classical screw balance, and a traditional long regulator arm rather than a more modern free-sprung, variable-inertia balance. The bridges and plates are finished in 18k Sedna gold, to echo the copper-finished surfaces on the original caliber. The caseback window offers an additional vintage-inspired flourish, namely a subtle, engraved version of the Seahorse that has been an emblem of the Speedmaster collection since its inception, here with a single eye of blue sapphire, the jewel that traditionally marks a 65-year anniversary.

And, as Barron’s writes, in a final tribute to its famed ancestor, the new Calibre 321 (US$81,000) is delivered in a special wooden box with a rosewood pattern and the same shape and design as the first Speedmaster boxes that were delivered to clients who purchased the model in 1957.  As OMEGA writes on the official website, the black step dial features familiar Moonwatch hands, a vintage OMEGA logo, as well as a small seconds sub-dial, 30-minute recorder and 12-hour recorder along with a central chronograph hand. Through the sapphire-crystal caseback, you can see the Calibre 321 inside.

As for our own 2022 recommendations, we recommend that anyone who owns an OMEGA call us for an inspection, restoration, and possible OMEGA watch repair. We’re known as the best OMEGA repair shop in New York City, and we see quite a few “vintage” and “older” OMEGA watches here in our shop. We’re passionate about the brand and love taking each watch apart and meticulously inspecting it and improving it as needed. If you’ve inherited or purchased a “used” or “vintage” OMEGA, that’s a special reason why you need to bring it in. These watches are often quite expensive, and if you own one, you want to have it inspected and repaired.