OMEGA watches have a bit of a “cult” culture behind them. Sure, everybody recognized Rolex. (We repair many Rolex watches, and love the brand). But OMEGA has a bit of cult vibe to it. People get bitten by the OMEGA virus and before you know it, they have one, two, three OMEGAs. Indeed, many OMEGA watches are handed down one by one over the generations. We were not surprised, therefore, to read that Omega kicked off 2021 with a bang by elevating its legendary Moonwatch to Master Chronometer. Of course, the OMEGA Moonwatch is one of the most famous luxury watches in the world; it went to the moon, after all. Omega’s President and CEO Raynald Aeschlimann explained, “When you redesign a cult watch like the Speedmaster Moonwatch, every detail must remain true to the original spirit of the timepiece. This chronograph is known around the world, so we approached its design with great respect, while at the same time elevating the movement to the next level of watchmaking.” (Read more, here.)

The moon landing was phenomenal, and OMEGA commissioned a YouTube video amongst the participants, here. As that video explains, “The iconic Speedmaster Moonwatch is a legend on Earth and beyond! For the astronauts who wore it into space, and the engineers on the ground, it became a vital tool on every space mission. Here, they recall the memories of their time with the world’s most famous chronograph.” As WatchTime explains, “Omega definitely shows respect for the past. The current Speedmaster Moonwatch Professional Co-Axial Master Chronometer Chronograph 42 mm, as this timepiece is known by its full name, is inspired by the fourth generation of the Moonwatch, which was worn by the astronauts of the Apollo 11 mission when they flew to the moon in 1969. Insiders often refer to this model as Ref. ST 105.012.” 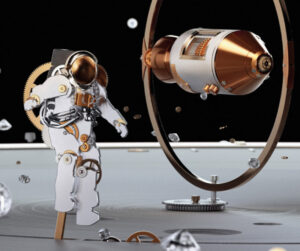 History on Your Wrist

OMEGA is a historical watch and a brand with deep historical roots. These go beyond and before the moon landings, though participation in the moon landings was a pivotal event to the brand. Many men and women who are in their fifties or sixties today remember the passion and excitement of the Apollo moon landings. Anyone who saw it live in the 1960s and early 1970s remembers well the bravery of NASA and the voyages to the moon. Thus, to have on your wrist a bit of this history is literally priceless.  Again, from WatchTime, “ef. ST 105.012 and Ref. ST 145.012 have asymmetrical cases because of their crown protectors. This protection was added after NASA saw a danger due to the possibility of inadvertently adjusting the crown and thus the time display. Ref. ST 105.012 and Ref. ST 145.012 are the officially certified models and have had the word “Professional” on their dials since 1966. Before that, this lettering had previously adorned only a few examples of Ref. ST 105.003. Buzz Aldrin is said to have worn an ST 105.012 when he stepped onto the lunar surface, while Michael Collins kept an ST 145.012 strapped to his wrist as he waited inside the capsule” (emphasis added).

If you’re lucky enough to own a new OMEGA or perhaps a more vintage variety, reach out to Ron Gordon Watch Repair of New York City for an evaluation. Ron can evaluate the condition of your OMEGA watch, explain recommended repairs, and then repair or upgrade the watch to the latest specifications.  You can learn more about OMEGA watch repair in New York City on the website, but the best course of action is to bring your OMEGA watch in for an inspection.  Yes, OMEGA is a bit of a “cult.” But it’s a “good cult,” as it is men and women who have a passion for history, for technology, and for a storied brand that literally “went to the moon.”