Ron Gordon shares insights into what’s inside your watch, starting with the type of escapement.

As a premier Swiss Watch Repair shop in New York, NY, I love to share my knowledge about Swiss watches with my customers. Indeed, many customers buy luxury Swiss watches such as Tag Heuer, Rolex, Omega, Longines, Tissot, Rado, Hamilton, Baume & Mericer, and LeCoultre because of their quality craftsmanship. But few know how to look ‘inside’ their watches, and still fewer can appreciate the mechanical beauty of these fine timepieces. In this blog post, I would like to share some insights into the ‘escapement’ of these watches. An escapement, of course, is the device in mechanical watches that transfers energy to the timekeeping element (the “impulse action”) and allows the number of its oscillations to be counted (the “locking action”). 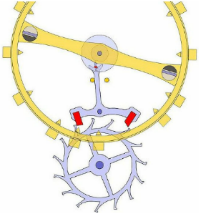 Omega Watches and the Co-Axial Escapement

English master watchmaker George Daniels, who invented the Co-Axial escapement in the 1970s and worked closely with OMEGA on its industrialization, is justifiably proud of his creation. He says, “When it becomes more widely known to consumers that watches with Co-Axial escapements have better chronometric performance than their counterparts with classic lever escapements and that the Co-Axial watches have longer service intervals, the demand for Co-Axial calibres will accelerate dramatically. But it has another major role: it will extend the popularity of mechanical watches into the 21st century and beyond.” You can click on the 2 links below to see how it works.

The first link also has a very slick video about the OMEGA Co-Axial. I repair OMEGA watches, of course, but as with any design change there are pro’s and con’s. Here’s their statement –

The main benefit of this new design becomes clear when it is compared with the lever escapement. The impulse in a lever escapement involves the wheel tooth sliding along the inclined surface of the pallet. This sliding movement generates considerable friction, making optimal lubrication vital if the escapement is to function correctly. However, lubricants are highly sensitive to ageing, as well as changes in their environment (temperature, humidity etc.) and therefore compromise the stability of the watch’s rate over time.

In contrast, the Co-Axial Escapement transmits energy using tangential forces provided by the components’ radial movements. Its very short sliding movement considerably reduces the contact surfaces and, therefore, the friction in the escapement. As a result, the escapement function is similar to that of a gear wheel meshing with a tooth, which means that it is unaffected by lubrication (a mere protective film on the tip of the escapement wheel teeth is sufficient to preclude wear and tear) and thus ensures a stable rate over the long term.

Now, again, there are pro’s and con’s to both types. If you are really interested in Swiss watches, stop by my shop or email me a comment on the blog. These watches are not just about style; they are microcosms of engineering, and in this case, there are competing solutions to certain design challenges.