We know we’re writing this in a time of crisis and concern due to the Coronavirus. Our prayers are with everyone in New York City, and indeed worldwide, who is grappling with the virus. Stay safe! That said, many of us are home-bound, and it’s a good time to go online and dream about open stores, open plays, and the return to normalcy that will come, hopefully sooner rather than later. So if you’re at your computer, your iPad, or your phone, let’s take a moment and dig into an exciting announcement by OMEGA, that is their “Two New Shades of Aqua Terra.” We follow OMEGA intensely, as it’s one of our more prominent watch repairs. After all, Ron Gordon Watch Repair is known as the best-in-class OMEGA watch repair in New York City, so we see a lot of these incredible watches. 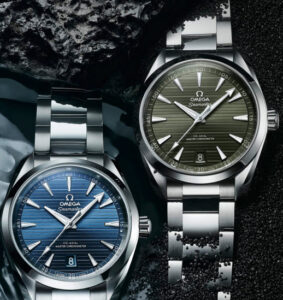 Here’s the text of the announcement from OMEGA –

With its diverse selection of dials, bracelets and straps, OMEGA’s Seamaster Aqua Terra collection for men already offers an incredible choice of looks.

There is of course, always room to bloom, especially when discerning customers demand it. To answer the call, OMEGA’s watchmakers have added two new dial colours to the popular collection’s rich palette.

In keeping with Aqua Terra’s well-established aesthetic, both dials are sun-brushed and distinguished by a horizontal “teak” pattern, inspired by the wooden decks of luxury sailboats.

Whichever colour they choose, customers can expect to receive a red card, as the driving force behind the dial is OMEGA’s Master Chronometer Calibre 8900, certified at the industry’s highest standard by the Swiss Federal Institute of Metrology (METAS).

And here’s a more technical summary of these two new designs. Both new Seamaster Aqua Terra models are housed in round, 41-mm stainless steel cases, and have the horizontal-striped “teakwood” motif on their sun-brushed dials — a visual signature established in the redesign of the Aqua Terra in 2017. The idea here is to evoke the deck of a luxury yacht. A date display appears in a window at 6 o’clock, while the hallmark hour and minute hands and wedge-shaped, applied hour indices are filled with Super-LumiNova.

Behind a clear sapphire caseback, you can see the movement, Omega’s co-axial Master Chronometer Caliber 8900, which meets both the official chronometer standards of the Swiss testing agency COSC and also the eight criteria set forth by Omega’s own certification, including the ability to resist magnetic fields to a level of 15,000 gauss. This self-winding caliber, also equipped with Omega’s now-emblematic co-axial escapement and a rotor decorated with Geneva waves, boasts a 60-hour power reserve in two series-connected spring barrels.
.
The Seamaster Aqua Terra in blue and green dials are offered on both a steel link bracelet, with brushed and polished finishes echoing those of the case, or a leather strap matching the color of each watch’s dial. Priced at $5,700 on the bracelet and $5,400 on the strap, the watches come with a special red card certifying the movement as having met the highest standards of the Swiss Federal Institute of Metrology, or METAS.  (Source: WatchTime).

Both of these color choices are incredible; you have to see them “with your own eyes” to experience them. Of course, OMEGA has shut down their New York stores during the shut down, but youc an use the links above to browse online. That said, let’s supposed you have an OMEGA watch already. Perhaps it’s new. Perhaps it’s old. But it may need an inspection, tune-up, and even a repair. We’re the best-in-class OMEGA watch repair, and we’re eager to serve your watch repair needs (after the shutdown ends).  Keep an eye on our website and blog to know our hours, and just take a deep breath. We’ll get through this, and the world will start again. Then, you can enjoy your OMEGA watch, whether you have an old one or a new one.