Tag Heuer watches are among the most brilliant and exciting watches that one can buy. As someone who repairs Tag Heuer watches here in my New York City shop, I see a lot of Tag Heuers – new, old, and family heirlooms. 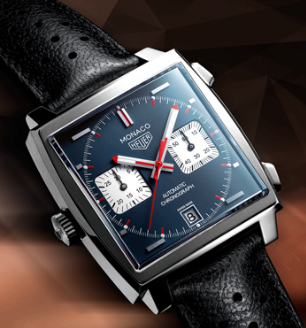 Once in a blue moon, I may see one from the late 1960s – like the incredible Heuer Monaco, issued on March 3, 1969.  The Heuer Monaco was the first square, water-resistant automatic chronograph watch in the history of Swiss watchmaking. Named by Jack Heuer following the Monaco Grand Prix (for which TAG Heuer is still a partner), the watch represented a complete break from the aesthetic codes of traditional watchmaking, with its large square case, metallic blue dial, bright red minute hand, domed plastic crystal and, most notably, its crown positioned on the left which, at the time, meant that the watch did not need winding.

Just as innovative at the time, its technology offered perfect water resistance – a first for a square watch. However, the origins of the revolution lay inside the watch: the famous Chronomatic Calibre 11, which was the first automatic chronograph movement offered for sale in the history of watchmaking. (Automatic, meaning it was self-winding – hence the label ‘Chronomatic.’).

With its track début in 1970, on the wrist of the Swiss driver Jo Siffert (the first racing driver to be sponsored by a watch brand – Tag Heuer), the following year it shared the cinematic limelight with Steve McQueen, who insisted on wearing it during filming for Le Mans in 1971. (You can learn more about the Le Mans 1971 film at the IMDb.com). Instantly recognizable and often copied, the “McQueen Monaco” (1133B model) has since become a much coveted watch on the auction and collectors’ circuit.

What’s exciting is that Tag Heuer has reissued this incredible watch, so if you don’t have one as a family heirloom, you can buy a ‘new’ one that preserves the incredible style of the original. Tag Heuer calls it ‘back to their roots,’ and I can see why. What’s exciting about these watches is that they are a type of classic style that never goes out of style, yet combines a sense of history with a sense of technological skill. For those too young to remember the Steve McQueen movie, I recommend you go to Amazon and rent it on DVD. The movie itself – besides featuring the Tag Heuer watch – has an interesting history, and there’s a documentary called ‘Steve McQueen – The Man and Le Mans’ (2015) which is about how troubled the movie production was.

But back to Tag Heuer, from their release online, we can read:

The 39 mm size, the crown on the left, the legendary petroleum blue dial with two white counters, the date window at 6 o’clock, the diamond-polished horizontal hour indices, the inscribed vintage Heuer logo, the calibre 11 automatic chronograph with date and water-resistance to 100 metres – all the attributes of the Monaco.

Note the three-part steel case (since 1998), which is slightly more square on the 2015 version, and closed with 4 screws; the two push-pieces at 2 and 4 o’clock are rectangular, the lugs a little larger, its calfskin strap perforated, the sapphire crystal (since 2009) and an open case-back which reveals the gears of the calibre are all features of the updated version. A beautiful interpretation that respects the iconic heritage of the La Chaux-de-Fonds manufacture. Connoisseurs will be under no illusion.

Purchase a New One or Get Your Old Tag Heuer Repaired

Of course, if you have an old Tag Heuer around bring it in to my Midtown NYC shop, and I can inspect it. I can give your watch a clean-up and a tune-up, so it will be running perfectly. Or, if you have one that’s not functioning, of course I can repair it. I need to see the Tag Heuer to inspect it, first, so call for an appointment and stop by with the watch. Tag Heuer watches are beautiful things, so it’s a shame to have one that doesn’t work or isn’t working well. It should be on your wrist, with a sense of style and history!