There’s illusion and then there’s allusion. Illusion, of course, is something that looks like something it’s not – the proverbial, mirage on the highway that looks like it’s water, but it’s just hot air above the pavement, for example. And then there’s allusion, as when Juliet asks, “What’s in a name? That which we call a Rose by any other name would smell as sweet,” alluding to her conundrum that her lover is from the house of Montague (not Capulet). Allusion is a reference from one thing, to another. 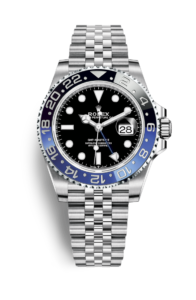 Let’s draw your attention to watches, specifically Rolex watches. As we’ve explained many times on this blog, nothing says style like a Rolex, nothing says “you’ve made it,” like a Rolex. The Rolex brand alludes to the fact that you’re a person with style, a person who knows fine watches, and a person with the financial wherewithal to purchase one of the best Swiss watches in the world.

And that brings us to the Rolex’s debut of the GMT-Master II, known among Rolex watch cognoscenti not just here in New York City but throughout the world as the “Batman” watch because of its black and blue color scheme.  The original was unveiled to the public in 1955, as the Batman craze built from comics to television. Even today there’s a Batman vibe in pop culture. But this watch is so much more than just a Batman watch, than just a black-and-blue color scheme.

According to the official Rolex website, “The Rolex GMT-Master was originally designed for professional use to aid airline pilots. However, its combination of peerless functionality and instantly recognizable aesthetics has attracted a wider audience of world travellers. Designed to show the time in two different time zones simultaneously during intercontinental flights, the GMT‑Master has come to be recognized for its robustness and versatile appearance. The GMT-Master II evokes intercontinental travel across time zones. Greenwich Mean Time (GMT) marks mean solar time at the Royal Observatory in Greenwich, London — the location of the original meridian used for calculating longitude and determining different time zones around the world.”  And, “In addition to conventional hour, minute and seconds hands, the GMT-Master II features an arrow-tipped hand, which circles the dial once every 24 hours, as well as a bidirectional rotatable 24-hour graduated bezel. The distinctively coloured 24-hour hand displays the “home” reference time in a first time zone which can be read on the graduations on the bezel.”

In no short order, this new version of the “Batman watch” is destined to become a classic alongside the vintage 1955 edition.  Note that the watch is also scratch proof, due to its construction out of ceramic metal.

Repairing Your Rolex (Vintage or Not)

We see a lot of Rolex watches here in our New York City watch repair shop. With our convenient Midtown watch repair location, we get a lot of busy New Yorkers who either live or work here in the City. It’s easy to drop off a watch for an inspection, and we can evaluate whether your Rolex just needs a tune up, or whether it’s time for more serious Rolex repair. Obviously, most of the watches we repair aren’t brand new, but many people who have inherited a Rolex or purchased a vintage Rolex search for authorized Rolex repair in New York City and end up with us. We’ll inspect it, evaluate it, give you and estimate, and where necessary tune it up and repair it.

If you have a Rolex, call us today.