New York’s own Cipriani Wall Street was the showcase for TAG Heuer’s launch of its Third Monaco Limited Edition in honor of the 50th anniversary of the brand’s iconic watch on July 10th.

Upon arrival, guests walked through a TAG Heuer heritage exhibition before entering the majestic event location. To unveil the timepiece, a spectacular light show illuminated the grand hall with neon lights and video projections showcasing the history of the TAG Heuer Monaco, leading up to the reveal of the latest limited edition inspired by the 1990s. 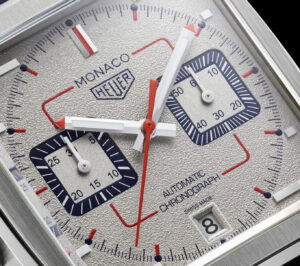 To commemorate the 50-year milestone, TAG Heuer is launching five new Monaco watches throughout the year that are inspired by the different decades from 1969 to 2019. The first of these models, inspired by the years 1969 to 1979, was unveiled at the Monaco Formula 1 Grand Prix in May, while the second limited edition, celebrating the period from 1979 to 1989, was presented in June in Le Mans, France. The third edition of the new Monaco watch, inspired by the 1990s, made its grand debut at the event.

The third limited-edition honors the decade of the 1990s with a steely industrial appearance. The boxy, metallic blue and red watch honors the city of Monaco and, of course, the road race that has given it so much fame. Glamour was on the line at the event with celebrity “brand ambassadors” such as Patrick Dempsey as well as other celebs such as Paulina Vega and Olivia Cuplo at the event. Of course the celeb most associated with TAG Heuer’s Monaco was Steve McQueen, whose 1971 movie, Le Mans, focused on the 24 hour Le Mans race. The Le Mans, of course, is the world’s oldest active sports car race held annually since 1923 and is called the “Grand Prix of Endurance and Efficiency.”

Glamor. Movies. Style. Stars. Celebs. Oh so boring, when what we really came to admire is the new TAG Heuer Monaco Limited edition!

For us “mere mortals” who weren’t in attendance at the Gala, the best starting point to admire the new TAG Heuer Monaco’s is at https://www.tagheuer.com/en-us/watches/monaco. There one can browse pictures of the watch and of course buy it (subject, of course, to availability as it is a limited edition!).   All ten available versions can be viewed as well at https://www.tagheuer.com/en-us/watches/monaco-watch.  As for the special edition and according to WatchTime, “The gray dial is grained and rhodium-plated, with blue scales around the characteristic squared subdials, which have a sandblasted finish. Red details, such as the central chronograph seconds hand, the tips of the hour and minute hands, and the hour indices, add depth and contrast. All the other elements of the original Monaco — introduced in 1969 and notable for its introduction of the first water-resistant square case and for housing one of the watch industry’s very first self-winding chronograph movements — are present in this special edition: the four-sided 39-mm steel case, the date window at 6 o’clock, the unconventional placement of the crown (left) and pushers (right), even the vintage-look, historically accurate “Monaco Heuer” logo (rather than the modern TAG Heuer logo) at 12 o’clock.”

Repairing and Restoring Your TAG Heuer

TAG Heuer’s Monaco has been around quite a long time at this point – fifty years. You may be lucky enough to have inherited one, or perhaps purchased one back in the 1960s, 1970s, 1980s, 1990s or whenever. Or you may have purchased a “vintage” TAG Heuer Monaco. No matter. No worries. Bring your TAG Heuer into Ron Gordon Watch Repair and seeing as we are known as the best TAG Heuer repair in New York City, Ron can get to work evaluating, inspecting, repairing, and tuning up your TAG Heuer so it will be as good as new. As is always true, there is no greater tragedy when it comes to TAG Heuer than owning a non-functioning watch. Like the roadrace it commemorates, TAG Heuer is a thing of beauty, style, AND functionality. So bring your watch in today for an evaluation, tune-up, and if need be TAG Heuer repair. Our New York City watch service is conveniently located in Midtown, not far from Grand Central.